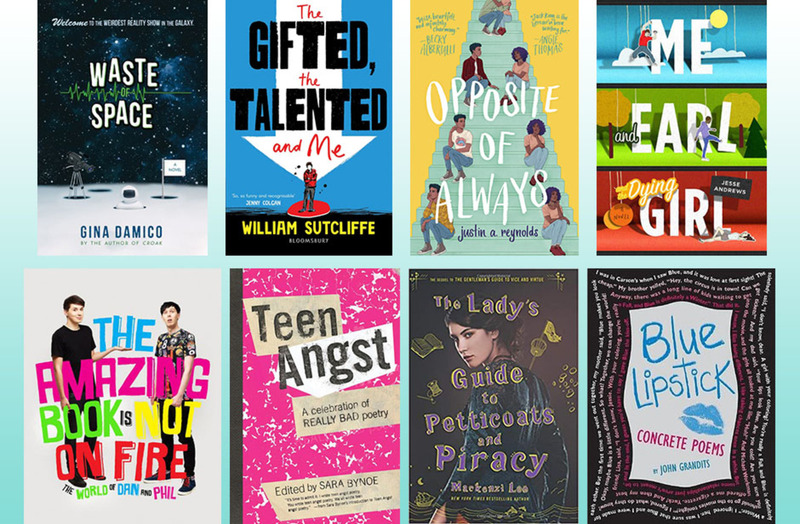 We’ve rounded up some of our favourite funny YA books, from the bittersweet and darkly comic to the laugh-out-loud hilarious.

Read on to discover some of our favourite novels, autobiographies and poetry collections guaranteed to put a smile on your face.

Teen Angst: A Celebration of Really Bad Poetry is the first, the best, and the biggest collection of teen angst poetry ever to be published. Divided into 12 categories, including I am Alone and No One Understands My Pain and Obvious Metaphors, this book is for anyone who has ever written truly terrible, meditative, or self-indulgent poetry. Actually, this book is for anyone who survived being a teenager.

All of the poets featured in this collection are now adults, living happy, angst-free lives. However, for this special book, they are willing to reveal excerpts from their old tattered notebooks or leather bound journals.

The Gifted, the Talented and Me by William Sutcliffe

Fifteen-year-old Sam is not a famous vlogger, he’s never gone viral, and he doesn’t want to be the Next Big Thing. In fact he’s ordinary and proud of it. None of which was a problem until Dad got rich and Mum made the whole family move to London.

Now Sam’s off to the North London Academy for the Gifted and Talented, where everyone’s busy planning Hollywood domination or starting alt-metal psychedelica crossover bands. Sam knows he’ll never belong, even if he wanted to. And that’s before he ends up on stage wearing nothing but a fur onesie…

A brilliantly funny look at fitting in, falling out and staying true to your own averageness.

Opposite of Always by Justin A. Reynolds

From debut author Justin A. Reynolds comes a razor-sharp, hilarious and heartfelt novel about the choices we make, the people we choose and the moments that make life worth reliving.

When Jack and Kate meet at a party, he knows he’s falling – hard. Soon she’s meeting his best friends and Kate wins them over as easily as she did Jack.

But then Kate dies. And their story should end there.

Yet Kate’s death sends Jack back to the beginning, the moment they first meet, and Kate’s there again. Healthy, happy, and charming as ever. Jack isn’t sure if he’s losing his mind.

Still, if he has a chance to prevent Kate’s death, he’ll take it. Even if that means believing in time travel. However, Jack will learn that his actions are not without consequences. And when one choice turns deadly for someone else close to him, he has to figure out what he’s willing to do to save the people he loves.

Waste of Space by Gina Damico

Cram ten hormonal teens into a spaceship and blast off: that’s the premise for the ill-conceived reality show Waste of Space. The kids who are cast know everything about drama -and nothing about the fact that the production is fake.

Hidden in a desert warehouse, their spaceship replica is equipped with state-of-the-art special effects dreamed up by the scientists partnering with the shady cable network airing the show. And it’s a hit! Millions of viewers are transfixed.

But then, suddenly, all communication is severed. Trapped and paranoid, the kids must figure out what to do when this reality show loses its grip on reality.

Me and Earl and the Dying Girl by Jesse Andrews

Greg Gaines is the last master of high school espionage, able to disappear at will into any social environment. He has only one friend, Earl, and together they spend their time making movies, their own incomprehensible versions of Coppola and Herzog cult classics.

Until Greg’s mother forces him to rekindle his childhood friendship with Rachel.

Rachel has been diagnosed with leukemia – cue extreme adolescent awkwardness – but a parental mandate has been issued and must be obeyed. When Rachel stops treatment, Greg and Earl decide the thing to do is to make a film for her, which turns into the Worst Film Ever Made and becomes a turning point in each of their lives.

And all at once Greg must abandon invisibility and stand in the spotlight.

In this book is a world. A world created by two awkward guys who share their lives on the internet!

We are Dan and Phil and we invite you on a journey inside our minds! From the stories of our actual births, to exploring Phil’s teenage diary and all the reasons why Dan’s a fail.

Learn how to draw the perfect cat whiskers, get advice on what to do in an awkward situation and discover which of our dining chairs represents you emotionally. With everything from what we text each other, to the time we met One Direction and what really happened in Vegas…

A 15-year-old girl named Jessie voices typical – and not so typical – teenage concerns in this unique, hilarious collection of poems. Her musings about trying out new makeup and hairstyles, playing volleyball and cello, and dealing with her annoying younger brother are never boring or predictable. Who else do you know who designs her own clothes and writes poetry to her cat? Jessie’s a girl with strong opinions, and she isn’t shy about sharing them.

Her funny, sarcastic take on high school life is revealed through concrete poetry: words, ideas, type, and design that combine to make pictures and patterns. The poems are inventive, irreverent, irresistible, and full of surprises – just like Jessie – and the playful layout and ingenious graphics extend the wry humor.

The Lady’s Guide to Petticoats and Piracy by Mackenzi Lee

A year after an accidentally whirlwind grand tour with her brother Monty, Felicity Montague has returned to England with two goals in mind – avoid the marriage proposal of a lovestruck suitor from Edinburgh and enroll in medical school. However, her intellect and passion will never be enough in the eyes of the administrators, who see men as the sole guardians of science.

But then a window of opportunity opens – a doctor she idolizes is marrying an old friend of hers in Germany. Felicity believes if she could meet this man he could change her future, but she has no money of her own to make the trip. Luckily, a mysterious young woman is willing to pay Felicity’s way, so long as she’s allowed to travel with Felicity disguised as her maid.

In spite of her suspicions, Felicity agrees, but once the girl’s true motives are revealed, Felicity becomes part of a perilous quest that leads them from the German countryside to the promenades of Zurich to secrets lurking beneath the Atlantic.