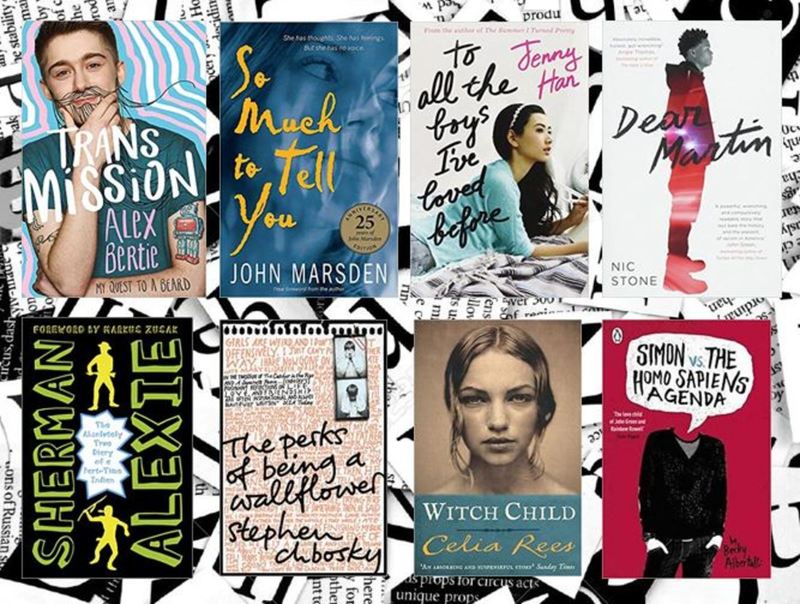 Take a look at our suggestions of brilliant books written as letters, diaries and memoirs:

Trans Mission: My Quest to a Beard by Alex Bertie

When I was 15, I realised I was a transgender man. That makes it sound like I suddenly had some kind of lightbulb moment. In reality, coming to grips with my identity has taken a long time.
Over the last six years, I’ve come out to my family and friends, changed my name, battled the healthcare system, started taking male hormones and have had surgery on my chest. My quest to a beard is almost complete. This is my story.

A brave and ground-breaking first-hand account of the life, struggles and victories of a young transgender man, as told by YouTuber Alex Bertie.

So Much to Tell You by John Marsden

So Much to Tell You is based on the true story of Marina, a young girl whose face was permanently damaged in an incident for which her father is responsible. Marina’s writing chronicles her journey towards healing.^


To All the Boys I’ve Loved Before by Jenny Han

Lara Jean keeps her love letters in a hatbox her mother gave her. One for every boy she’s ever loved. When she writes, she can pour out her heart and soul and say all the things she would never say in real life, because her letters are for her eyes only.

Until the day her secret letters are mailed, and suddenly Lara Jean’s love life goes from imaginary to out of control.

Justyce McAllister is top of his class and set for the Ivy League – but none of that matters to the police officer who just put him in handcuffs. And despite leaving his rough neighbourhood behind, he can’t escape the scorn of his former peers or the ridicule of his new classmates. Justyce looks to the teachings of Dr. Martin Luther King Jr. for answers. But do they hold up anymore? He starts a journal to Dr. King to find out.

Then comes the day Justyce goes driving with his best friend, Manny, windows rolled down, music turned up – way up, sparking the fury of a white off-duty police officer beside them. Words fly. Shots are fired. Justyce and Manny are caught in the crosshairs. In the media fallout, it’s Justyce who is under attack.

Sherman Alexie tells the story of Junior, a budding cartoonist who leaves his school on the Spokane Indian Reservation to attend an all-white high school. This heartbreaking, funny, and beautifully written tale, featuring poignant drawings that reflect the character’s art, is based on the author’s own experiences. It chronicles contemporary adolescence as seen through the eyes of one Native American boy.


The Perks of Being a Wallflower by Stephen Chbosky

Charlie is a freshman. And while he’s not the biggest geek in the school, he is by no means popular. Shy, introspective, intelligent beyond his years yet socially awkward, he is a wallflower, caught between trying to live his life and trying to run from it.

Charlie is attempting to navigate his way through uncharted territory: the world of first dates and mix-tapes, family dramas and new friends; the world of sex, drugs, and The Rocky Horror Picture Show, when all one requires is that perfect song on that perfect drive to feel infinite. But Charlie can’t stay on the sideline forever. Standing on the fringes of life offers a unique perspective. But there comes a time to see what it looks like from the dance floor.

When Mary sees her grandmother accused of witchcraft and hanged for the crime, she is silently hurried to safety by an unknown woman. The woman gives her tools to keep the record of her days – paper and ink.

Mary is taken to a boat in Plymouth and from there sails to the New World where she hopes to make a new life among the pilgrims. But old superstitions die hard and soon Mary finds that she, like her grandmother, is the victim of ignorance and stupidity, and once more she faces important choices to ensure her survival.


Simon vs the Homo Sapians Agenda by Becky Albertalli

Straight people should have to come out too. And the more awkward it is, the better.

Simon Spier is sixteen and trying to work out who he is – and what he’s looking for.
But when one of his emails to the very distracting Blue falls into the wrong hands, things get all kinds of complicated.
Because, for Simon, falling for Blue is a big deal …

Have you read any of the books on the list?
Let us know your favourite reads in the form of letters, diaries and memoirs online @readingagency