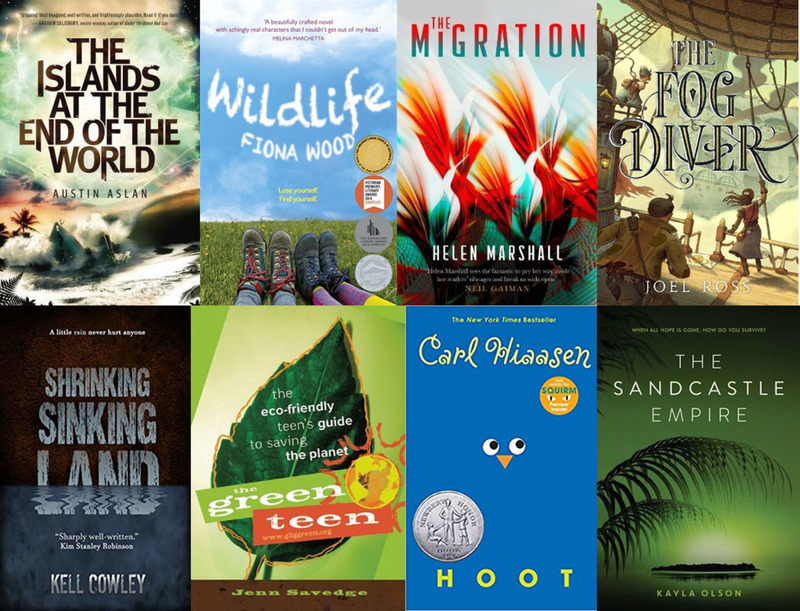 To celebrate Earth Day on 22 April we’ve rounded up some of our favourite books about the natural world. Earth Day was created to promote awareness and appreciation for the Earth’s environment, and sees people all over the world take action to protect the planet through activities such as attending marches, planting trees, cleaning up roads and parks and petitioning businesses and elected officials.

Read on to discover some of our favourite books which focus on nature, wildlife and the environment.

The Islands at the End of the World by Austin Aslan

Sixteen-year-old Leilani loves surfing and her home in Hilo, on the Big Island of Hawaii. But she’s an outsider – half white, half Hawaiian, and an epileptic.

While Lei and her father are on a visit to Oahu, a global disaster strikes. Technology and power fail, Hawaii is cut off from the world, and the islands revert to traditional ways of survival. As Lei and her dad embark on a nightmarish journey across islands to reach home and family, she learns that her epilepsy and her deep connection to Hawaii could be keys to ending the crisis before it becomes worse than anyone can imagine.

A powerful story enriched by fascinating elements of Hawaiian ecology, culture, and warfare, this captivating and dramatic debut from Austin Aslan is the first of two novels. The author has a master’s degree in tropical conservation biology from the University of Hawaii at Hilo.

Everybody loves Mother Paula’s pancakes. Everybody, that is, except the colony of cute but endangered owls that live on the building site of the new restaurant. Can the awkward new kid and his feral friend prank the pancake people out of town? Or is the owls’ fate cemented in pancake batter?

The Sandcastle Empire by Kayla Olsen

Before the war, Eden’s life was easy—air conditioning, ice cream, long days at the beach. Then the revolution happened, and everything changed.

Now a powerful group called the Wolfpack controls the earth and its resources. Eden has lost everything to them. They killed her family and her friends, destroyed her home, and imprisoned her. But Eden refuses to die by their hands. She knows the coordinates to the only neutral ground left in the world, a place called Sanctuary Island, and she is desperate to escape to its shores.

Eden finally reaches the island and meets others resistant to the Wolves. But their solace is short-lived when one of Eden’s new friends goes missing. Braving the jungle in search of their lost ally, they quickly discover Sanctuary is filled with lethal traps and an enemy they never expected.

The Green Teen: The Eco-Friendly Teen’s Guide to Saving the World by Jenn Savedge

This “on-the-go” guide is filled with great green ideas that can be implemented in homes, schools, and throughout the community. It features project suggestions on how to “green your wardrobe” and “trim your waste-line”, and interviews with eco-active teens about their real-life projects.

It also contains helpful resources such as a sample proposal you can use to develop a recycling programme in your school; ingredients to avoid in personal care products; and the top 10 foods to buy organic.

Life? It’s simple: be true to yourself.
The tricky part is finding out exactly who you are…

In the holidays before the dreaded term at Crowthorne Grammar’s outdoor education camp two things out of the ordinary happened.
A picture of me was plastered all over a twenty-metre billboard.
And I kissed Ben Capaldi.

Boarding for a term in the wilderness, sixteen-year-old Sibylla expects the gruesome outdoor education program – but friendship complications, and love that goes wrong? They’re extra-curricular.

One week before the Global Mandatory Hibernation and Flea Wheeler will do anything to avoid a long winter underground. A claustrophobic climate refugee who has been living rough on the flooded streets of Manchester, Flea dreads the day she’ll be forced into shelter so a geoengineering experiment can attempt to reverse the chaotic effects of global warming. Armed with nothing but her stolen umbrella, Flea is on a mission to stay on the surface and somehow survive the extreme weather.

It turns out she’s not the only one. While on the run from the curfew police, Flea falls in with loudmouth vlogger Dylan Moon who believes aliens are controlling the storms and planning a planetary takeover. At first, Flea takes Dil for a conspiracy nut. But after witnessing a series of inexplicable weather events, she realizes there may be some truth to his crazy theories. Is there a dark secret behind the looming climate experiment? Flea has one week left to evade the hibernation order and decide what she truly believes.

The Migration by Helen Marshall

Storms and flooding are worsening around the world, and a mysterious immune disorder has begun to afflict the young. Sophie Perella is about to begin her senior year of high school in Toronto when her little sister, Kira, is diagnosed. Their parents’ marriage falters under the strain, and Sophie’s mother takes the girls to Oxford, England, to live with their Aunt Irene.
An Oxford University professor and historical epidemiologist obsessed with relics of the Black Death, Irene works with a centre that specializes in treating people with the illness. She is a friend to Sophie, and offers a window into a strange and ancient history of human plague and recovery. Sophie just wants to understand what’s happening now; but as mortality rates climb, and reports emerge of bodily tremors in the deceased, it becomes clear there is nothing normal about this condition—and that the dead aren’t staying dead.

When Kira succumbs, Sophie faces an unimaginable choice: let go of the sister she knows, or take action to embrace something terrifying and new.

A deadly white mist has cloaked the earth for hundreds of years. Humanity clings to the highest mountain peaks, where the wealthy Five Families rule over the teeming lower slopes and rambling junkyards. As the ruthless Lord Kodoc patrols the skies to enforce order, thirteen-year-old Chess and his crew scavenge in the Fog-shrouded ruins for anything they can sell to survive.

Hazel is the captain of their salvage raft: bold and daring. Swedish is the pilot: suspicious and strong. Bea is the mechanic: cheerful and brilliant. And Chess is the tetherboy: quiet and quick…and tougher than he looks. But Chess has a secret, one he’s kept hidden his whole life. One that Lord Kodoc is desperate to exploit for his own evil plans. And even as Chess unearths the crew’s biggest treasure ever, they are running out of time…

Will you be celebrating Earth Day?
Check out the WWF’s suggestions for things you can do to help our protect planet.