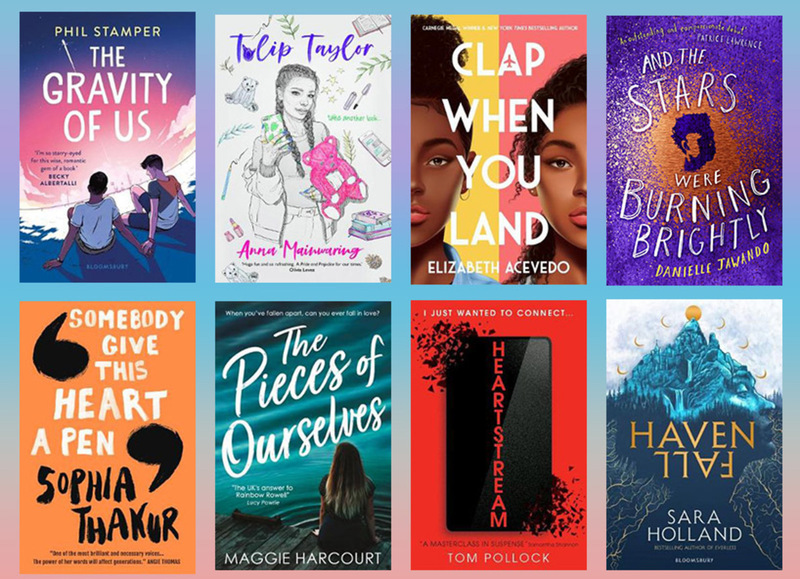 If you’re looking for some inspiration for your TBR pile, we’ve got you covered!

Clap When You Land by Elizabeth Acevedo

Camino Rios lives for the summers when her father visits her in the Dominican Republic. But this time, on the day when his plane is supposed to land, Camino arrives at the airport to see crowds of crying people…

In New York City, Yahaira Rios is called to the principal’s office, where her mother is waiting to tell her that her father, her hero, has died in a plane crash.

Separated by distance – and Papi’s secrets – the two girls are forced to face a new reality in which their father is dead and their lives are forever altered.

And then, when it seems like they’ve lost everything of their father, they learn of each other.

“This is the best book I’ve read all year. Dealing with the much forgotten impact of 9/11 on innocent people and the long term effects on their lives the verse format allows the smooth flow between the dual lives of two sisters and their emotional coming together.”

“Extremely well written. Relevant and engaging. Elizabeth’s latest novel ‘Clap When you land’ is a sensitive insight into the effects of 9/11 on the lives of ordinary people. Beautiful, evocative language and lyrical rhyme. An outstanding novel.”

The Pieces of Ourselves by Maggie Harcourt

Until Hal arrives. He’s researching a story about a missing World War I soldier, and he wants Flora’s help. Flora used to love history before the Incident, but spending so much time with Hal is her worst nightmare.

Yet as they begin to piece together the life of the missing soldier, a life of lost love, secrets and lies, Flora finds a piece of herself falling for Hal.

“The plot was captivating and Hal Waverly is a rare male main character that needs to be showcased more in literature. It was a bitter-sweet, heart-wrenching read filled with suspense and mystery but never made me feel confused. It was educational and sensitive, and taught me a lot about the struggles [the] characters are facing…”

Cat is in love. Always the sensible one, she can’t believe that she’s actually dating, not to mention dating a star. But the fandom can’t know. They would eat her alive. And first at the buffet would definitely be her best friend, Evie.

Amy uses Heartstream, a social media app that allows others to feel your emotions. She broadcasted every moment of her mother’s degenerative illness, and her grief following her death. It’s the realest, rawest reality TV imaginable. But on the day of Amy’s mother’s funeral, Amy finds a strange woman in her kitchen. She’s rigged herself and the house with explosives – and she’s been waiting to talk to Amy for a long time.

Who is she? A crazed fan? What does she want?
Amy and Cat are about to discover how far true obsession can go.

“A great book – cleverly written with hidden clues and plot twists; a gripping, emotional read! I thought this book was really well written and included many plot twists that still have me pondering over the characters, even after I’ve finished it!

The book brought out many emotions in me and, whilst at times it had me pulling at my hair with fury at the characters, it kept me on the edge of my seat for the entire duration of the book, and gave all in all, a satisfying ending. Also, Pollock managed to include many ideas of ways that people deal with grief and heartbreak, creating the image that none were ‘wrong’, but that everyone deals with sadness in their own way."

Somebody Give This Heart a Pen by Sophia Thakur

The collection is arranged as life is: from youth to school, to home life, falling in love and falling straight back out again. The poems draw on the author’s experience as a young mixed-race young woman trying to make sense of a lonely and complicated world.

With a strong narrative voice and emotional empathy, this is poetry that will resonate with all young people, whatever their background, and whatever their dreams. As she says, she hopes the poems will help readers “grow through what they go through”.

“This book moved me – I really enjoyed working through the sense of loss, hurt, pain and ultimately healing that unravelled throughout the poetry and storyline. It felt as though I was travelling with the author through her life and experiencing her emotions, very candidly written and I’m sure this book will be an eye opener for many people too.”

“I am not much of a poetry reader, so considering I am new to the genre, I enjoyed it quite a bit. The book was split up into different sections, and each poem related perfectly to the section it was in. The book had many themes but I felt resilience was a key element.”

And the Stars Were Burning Brightly by Danielle Jawando

When fifteen-year-old Nathan discovers that his older brother Al, has taken his own life, his whole world is torn apart.

Al had so many dreams…so why did he do it?

Convinced that his brother was in trouble, Nathan decides to retrace Al’s footsteps. As he does, he meets Megan, Al’s former classmate, who is as determined as Nathan to keep Al’s memory alive.

Together they start seeking answers, but will either of them be able to handle the truth about Al’s death when they eventually discover what happened?

An extraordinary novel about loss, understanding and the importance of speaking up when all you want to do is shut down, from an incredible new talent.

“This book is a great read, and was hard to put down. It covers some difficult themes including suicide and bullying, and the impact this has on friends and family. The three main characters Nathan, Megan and Al are very realistic and engaging, and you really get drawn into their stories. The themes are fairly dark, however the story remains uplifting and hopeful for the future.”

Maddie loves spending summers at her uncle’s Inn at Havenfall. But the Inn is much more than a Maddie’s safe haven, and life in Havenfall isn’t without its secrets. Beneath the beautiful, sprawling manor in Colorado lie hidden gateways to other worlds, some long-sealed by ancient magic.

When a body is found on the grounds, the volatile peace brokered between these worlds is irrevocably compromised. What’s worse is that Maddie’s friend Brekken stands accused of the murder. With everything she loves at stake, Maddie must confront shocking truths about the dangers lurking beneath Havenfall – and discover who she really is.

“It was very well written and engaging…I loved this book. The different worlds and the relationships between them was a very interesting concept that intrigued me…the plot was very rich and a lot was going on. I loved the characters, especially Maddie, who developed a lot throughout the story.”

The Gravity of Us by Phil Stamper

Cal wants to be a journalist, and he’s already well underway with almost half a million followers on his FlashFame app and an upcoming internship at Buzzfeed. But his plans are derailed when his pilot father is selected for a highly-publicized NASA mission to Mars. Within days, Cal and his parents leave Brooklyn for hot and humid Houston.

With the entire nation desperate for any new information about the astronauts, Cal finds himself thrust in the middle of a media circus. Suddenly his life is more like a reality TV show, with his constantly bickering parents struggling with their roles as the “perfect American family.”

And then Cal meets Leon, whose mother is another astronaut on the mission, and he finds himself falling head over heels—and fast. They become an oasis for each other amid the craziness of this whole experience. As their relationship grows, so does the frenzy surrounding the Mars mission, and when secrets are revealed about ulterior motives of the program, Cal must find a way to get to the truth without hurting the people who have become most important to him.

“It’s a great read with LGBTQ+ themes and talks about streaming and social media, family issues, mental health (anxiety, depression) etc…There were quite a lot of themes within the book but it didn’t feel ‘heavy’ – the main character was flawed but relatable and the developing romance was very cute.”

Challenged to go on a `survival’ reality TV show, fifteen-year-old make-up vlogger Tulip only accepts to escape her mother’s money-making schemes and protect her younger brother and sister. Set up to fail, can she prove to the TV show, to Harvey – the cute but annoying boy who got her on there – and most importantly to herself, that she’s more than just a pretty face?

As Tulip puts down her phone and heads for the hills, she finds she has both the courage and insight to take on each new challenge. But as ‘reality’ gets ever more crazy, will either teen escape their families and their time in the spotlight unscathed?

“I found it funny and engaging. By the end of the book I was really routing for Tulip Taylor to succeed and I wanted the book to have a happy resolution…The book is told from Tulip’s perspective and I found her such a relatable character. I think young adult readers could really relate to Tulip and her opinions on life, friends, school and boys. I liked the relationships she had with the characters in the book and I particularly liked the relationship with her family. The writer portrayed the family as dysfunctional, yet they were loving and looked out for each other. They were not perfect and Tulip knew that but it felt very real and current.

In an age where Instagram and your social media presence is everything I liked that by the end of the book Tulip’s perspective on social media had changed and that she recognised that there were more important things to life. I also enjoyed the comedy situations that Tulip found herself in. I liked how by her own will and determination she succeed when all around her everyone expected her to fail. I felt that it was a good book for reading on a beach or in a park in summer."

Which books are you most looking forward to reading?

Visit your local library website or app to borrow books, eBooks and audio books for free, or support your local bookshop with ethical online retailer Hive