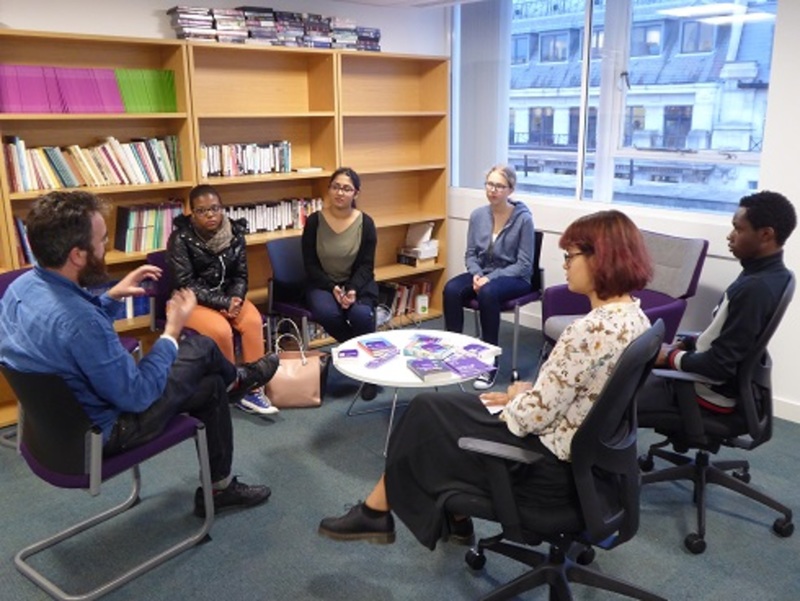 Ahead of the announcement of the 2016 Man Booker Prize winner later this month, Reading Hackers from across London met Jon Day at Kings College London to interview him about the prize. Here is Jess, Olga, Jay, Ephanie and Karishma’s interview!

Have you always loved reading?

I was a late reader – I couldn’t read until I was about ten and when I went to university I was diagnosed as dyslexic, which is a bit weird for a Booker judge I suppose, given that we have to read a novel a day… But once I had figured out what to do I was obsessed.

What is your favourite book?

That’s quite easy – Ulysses by James Joyce. I wrote about it for my thesis and it’s not just an influential novel… it’s a novel that I think has taught us what it means to be a human being really.

I’m not very well read in fantasy. I read The Lord of the Rings and The Hobbit when I was younger… I do love The Hobbit.

What did you do after university?

I was a bicycle courier, delivering packages in London. It was quite a good job for a reader to do because I had a lot of time sitting around. I always had a book in my bag during those times when I wasn’t working, and I started writing book reviews as well.

Do you think books written for teenagers have less merit than adult counterparts?

No, certainly not! Where they’re celebrated is different though.

Do you think whether a book is good or not so good is an absolute decision?

No – I don’t think I would ever say that there’s no point somebody making a case for a book being good. And anything you write has to have thought behind it – you have to really believe in the genre. Loads of people sat down after 50 Shades of Gray was published and thought ‘I can write this’, and that isn’t the case. You can’t do it cynically.

Would you be able judge a book that you wrote?

Yes – I think a good writer is their own worst critic. I don’t write novels but I write non-fiction, and when my first book was published… you’re very proud of course, but you also have this terrifying anxiety that somebody else is going to spot all the mistakes you know are there!

Finally, how did you find judging the Man Booker prize?

Hard work! We basically had to read a book a day… I measured it this morning, and it was something like over 20ft of books that we read. I read a 700 pager in one day but that was 6am to 12pm doing nothing else. I felt a bit like that guy who ran 400 marathons.