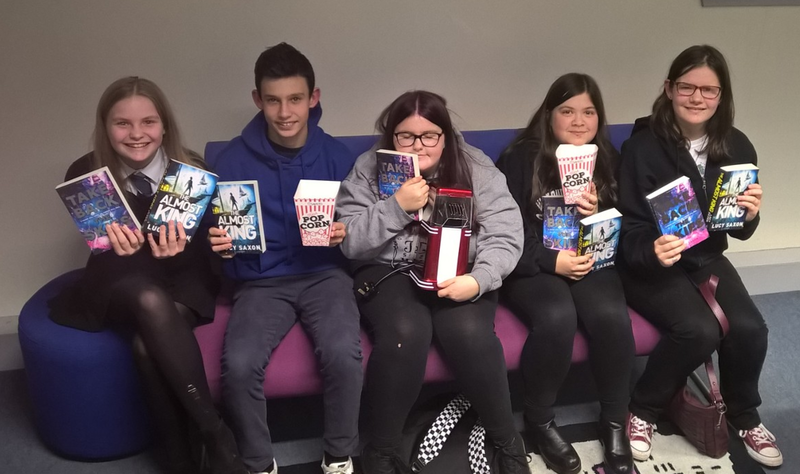 Lucy Saxon is the author of YA fantasy novel Take Back the Skies, and its sequel The Almost King, the start of a series of six novels set in the world of Tellus. The third book in the series, The City Bleeds Gold, is due out in March 2017.

Where do you get your inspiration from?

All over the place! Ideas will spawn from just daydreaming, or overhearing conversations, or other things I’ve read. All it takes is a quick ‘what if X did Y instead’ to start the inspiration spiral. I tend to get my best ideas at about 2am, riiiiight before I’m about to fall asleep, which is great for writing, but less great for my sleep habits.

How old were you when you first became interested in writing?

I was about twelve or thirteen when I properly got into writing. I’d been interested before when doing creative writing for school stuff, but never really thought much about it. Then when I was twelve I discovered fanfiction and that was really all it took for me to start spending all my free time writing that, which eventually branched out into me writing original stories!

Have you ever had an idea, written the first chapter and then never continued?

So many times! Sometimes I don’t even get as far as the first chapter. I tend to plot excessively before I start writing something, so with ideas like that I get a certain way into plotting and realise ‘nope, this isn’t gonna work’. However, I do also have an entire folder on my laptop full of ideas that I’ve started, and very much intend to come back to later. Hopefully those ones will work out!

Which of your own novels is your favourite? Why?

That’s like asking a parent to pick a favourite child! I always say that my favourite novel is whichever one I’m just about to start working on. At that stage, it’s the most exciting thing in the world to me, and anything is possible with it. The potential of it is a very good feeling – at that point, it could turn out to be the best thing I’ve ever written.

What do you prefer reading – paper or Kindle?

Paper! I own a Kindle Fire, but I’ll be honest I mostly use that to play app games on long flights. I don’t mind reading things off a screen – like I said, I’m hugely into fanfiction – but when it comes to books I love I want to have a paper copy to display on my shelves. So either I’ll just buy a paper book, or I’ll end up buying both versions. I just love looking at pretty books!

Do you have any advice for young writers?

Don’t expect to be perfect first try, and don’t let that put you off trying again. Writing is a thing that takes practice, and everything you write will lead to you becoming a better writer. Just because an idea doesn’t turn out how you imagined it in your head doesn’t mean it’s bad, and even if you think something’s bad that doesn’t mean it can’t get better. That’s what editing is for!

Have you ever made the right amount of pasta? And do you think any of your characters could?

I have never in my life made the right amount of pasta. I hold that as sort-of the gold standard of adulthood; once I’m capable of doing that, I’ll be a Proper Adult. Though even my mum struggles with pasta portions, so to be honest I think the “right” amount of pasta might actually be a myth. For me, the only correct amount is ‘as much as physically possible’. As for my characters, I think Alice might be able to manage it.

How many pairs of “work socks” do you own?

Do you think you still have room for improvement?

I always have room for improvement. I’m only twenty-one, I’d be a bit disappointed if I peaked this early in life! But I think everyone’s always got room for growth and improvement; things would be a bit boring if you didn’t!

Do you have a favourite book series you have read more than once?

There are quite a few series’ I’ve read more than once, but the one that outshines all others is the Harry Potter series. I’m definitely into double figures with how often I’ve re-read that series. Also the Percy Jackson series is one I’ll re-read endlessly instead of reading all the books I own and haven’t yet read. There’s just something great about coming back to a familiar story with characters you already know and love.

If you could recommend one not-so-well-known author’s book, what would it be?

I don’t know if it would be considered a not-so-well-known author but I am forever in love with The Nowhere Chronicles by Sarah Silverwood and forever surprised by how few people have read the trilogy. I would definitely recommend them!

What was your favourite/least favourite subject at school?

I loved Physics in school. Maths too, but Physics was my absolute favourite, and was what I intended to study at university before my health issues got in the way. Least favourite was probably Geography; while I had some lovely Geography teachers at school who tried their hardest with me, I just didn’t click with it whatsoever.