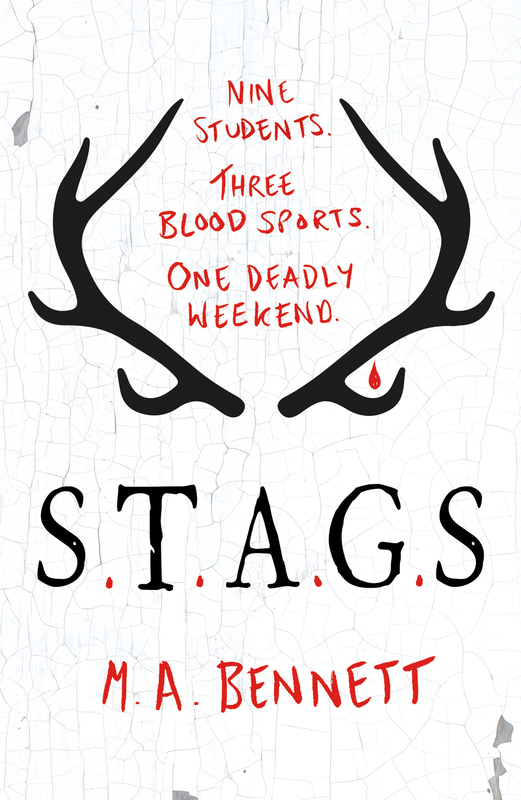 Reading Hackers at Highfields School interviewed M.A. Bennett about her debut novel STAGS, a twisting thriller for fans of One of Us Is Lying and Pretty Little Liars.

Are you planning to write a sequel? Or any other books in the same world? We can’t wait to read more!

“Funnily enough, when I first wrote STAGS it was going to be a standalone, (despite that cheeky question mark at the end!) because I had no idea if people were going to like it. Now my publishers have commissioned two more, so YES I’m happy to say there will be a middle and an end to the story, also set in STAGS and Longcross.”

When did you know you wanted to be an author?

“I knew at school. I wrote the Nativity play at my primary school and they very sweetly put it on! Then I wrote some (very bad) novels at the age of 14 and 15. But then I got sidetracked by uni and work and didn’t get around to writing a book until I was over 30.”

How long did it take for you to get published? And how did you go about it?

“I know an author who was the mother of a schoolfriend. She suggested I write three chapters of a novel and send it to some literary agents. Then the agent took my completed novel to the Frankfurt Book Fair and came back with two book deals.”

What inspired you to write this particular book?

“They always say ‘write what you know’ and this was a world I knew a bit about. I grew up in a little cottage in the grounds of a stately home where my Gran worked. She started off as a kitchen maid and rose to housekeeper. Every weekend in hunting season the big house had shooting parties. Lots of incredibly well-to-do people came up for the weekend to kill things and my Gran had to run around after them. So I began to understand about class and how deeply ingrained it is in British society.”

Did you know what the ending would be when you started writing the story?

“Yes. I always knew where it was going, even if I didn’t know entirely how I was going to get there!”

Could anyone really not know if they were a murderer or not?

“I think for Greer it’s a matter of definition. She knows she’s been complicit in a killing, but doesn’t really understand how guilty she is. Was it unintentional (manslaughter) or did she mean to do it (murder). The whole book is her testimony – she’s trying to figure it out.”

Will there be a film of STAGS? We’d love to see it!

“The rights have been bought by Fox and Chernin Entertainment (who made ‘Life of Pi’ and ‘Hidden Figures’). I’ve signed contracts and had some very enthusiastic phone calls and lunches with Hollywood folk. Of course, things can always go wrong in the film world, but the signs are good!”

Is STAGS a book that’s standing for or against technology?

“Neither. I wanted to start a conversation. I love paper books and country walks and log fires, but I also love tech and social media. I think it’s about balance. If you go too far either way, that’s probably not good.”

The book frequently references films; do you think this might date it?

“No, because the films are always there, whether they are five years old or fifty. I established right at the start that Greer and her da would watch all kinds of film, from black-and-white to modern blockbusters. What I was more worried about was the references to social media. Between the first draft and the edit – a matter of three months – I got my teenage son to check the references and he went through saying ‘stale meme, stale meme, stale meme.’”

Do you agree with what Henry said about technology?

“I agree with some of it. I don’t want to eat a meal with my family when everyone is on their phones and can’t have a conversation. But I think a lot of what Henry is expressing is fear – social media gives everyone a voice, that’s why oppressive regimes like China ban it. So it’s just as threatening to an antiquated class system, it lets the little guy rise up.”