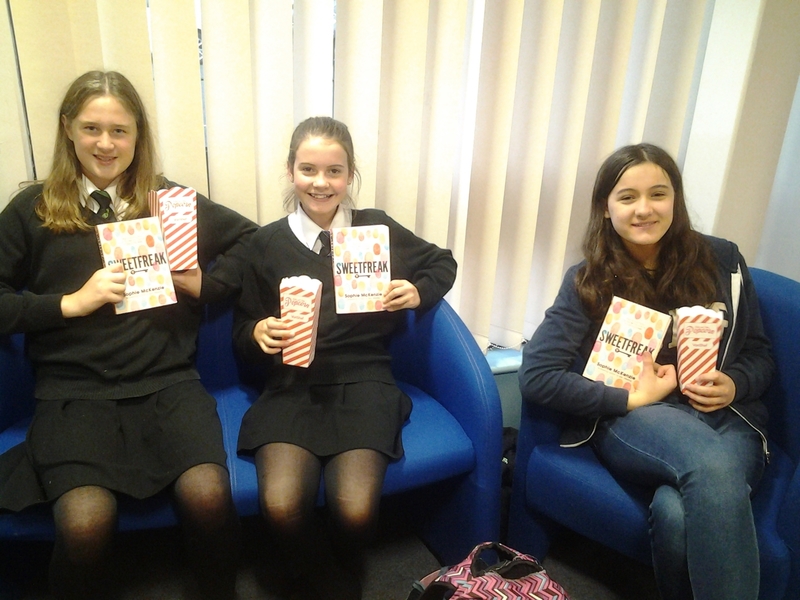 SweetFreak is about how young people use social media, and how it can both facilitate friendship and create very intense and competitive environments. Do you think the novel could have been written 10 years ago? How about 10 years in the future? Do you see social media becoming even more essential to our lives and how we interact with each other?”

“I definitely don’t think the same novel could have been written ten – or even five – years ago. Social media has transformed the way people interact. It’s impossible to predict the future when technology is so fast-moving. I wonder, though, if there might be a bit of a backlash against social media, when it just becomes too intrusive. Certainly the echo chambers social media creates (where its possible for us only to source our news from a very limited circle) are potentially dangerous.”

“Where did you get the idea? Was it from personal experience?”

“No, thankfully. I was never bullied at school, though it definitely went on. Bullying happens to all sorts of people in all sorts of situations. With SweetFreak, I wanted to explore not only the horrible, anonymous, online threats but also the way Carey is bullied by being excluded from her friendship groups at school and how isolated she becomes as a result. I started the book after reading several news items on teenagers who had been so badly bullied that they wanted to end their own lives.”

“How do you make characters so realistic? Were any of the characters in SweetFreak based on real people?”

“Thank you, it’s great to hear the characters feel real. They feel real to me too – which I think is the main reason why they come across as authentic. For me, writing believable characters is all about spending time before I write on making sure I have a strong sense of who they are. I think about appearance, character traits, how they see themselves, and how they are viewed by friends and family.”

“Carey is easily manipulated by Rose, Taylor and Seti. Why did you make her so vulnerable?”

“Great question! For me, Carey becomes more vulnerable and easier to manipulate as the story progresses. At the start of the book she seems strong and positive, the sort of person who you couldn’t imagine (and who couldn’t imagine herself) getting obsessed over a boy like Amelia has with Taylor. But then her world collapses and she loses all her support structures. When the bullying at school begins and she starts to feel truly isolated she doesn’t feel she can turn to anyone for help and this makes her particularly vulnerable. Rose and Taylor manage to manipulate her because she is so desperate for friendship.

With Seti I think the situation is a little different – Seti is older and has a lot more life experience than Carey, who has never come into contact with a thief before and doesn’t imagine that Seti will betray her. I tried to show in all three cases that there might be complex reasons why Rose, Taylor and Seti behave as they do. I reckon you could write a book about each of them, they’re all interesting, complicated characters in their own right!”

“Carey’s relationship with her sister Poppy changes throughout the novel. Would you agree that their relationship is ultimately the most important?”

“Absolutely, yes. For me the relationship between the two sisters is at the heart of the story.”

“Do Blue and Carey end up having a long-term relationship? Do they ever see Seti again?”

“One of the great things about reading a book is that you’re able to decide for yourself what happens to all the characters after it finishes. In my head, yes, Blue and Carey do have a long term relationship and, no, they don’t see Seti again, but if that’s not how you want to see it, that’s up to you.”

“By the end of the novel, some of the characters are redeemed whereas others continue the same pattern of behaviour. Was it important that the book have a few loose ends?”

“Definitely. It wouldn’t have been realistic for every character to learn important lessons and change their behaviour as a result: Poppy and Carey do, but Amelia, Taylor and Carey’s dad, for example, carry on more or less as before. In real life, there aren’t always happy endings.”

“I became a journalist straight after university because it looked like an interesting career. I did some work experience, then a course, and worked my way up. I always liked being a journalist but I didn’t love it. Many years later, after I got made redundant from a job, I decided to take a creative writing class. I adored writing stories from the start and knew at once it was my absolute ambition to get a book published.”

“What advice would you give someone who wants to pursue English as a career, i.e. as a journalist or author?”

“You don’t need to study English to become a writer, though of course it helps to have read lots of books. In fact, my main advice to any aspiring writers would be to read a lot and to keep writing. Getting feedback from people who understand what you’re trying to do and whose opinions you trust and respect can also be helpful.”

“Which authors and/or books have most influenced your writing?”
“Too many to list here! As a child I read a lot of Nina Bawden, Elizabeth Goudge and Laura Ingalls Wilder. More modern writers whose books helped me write when I was starting out include Antony Horowitz, Jacqueline Wilson and Kate Cann.”

“_SweetFreak_ shows the darker side of social media and the internet. What is your favourite thing about them?”