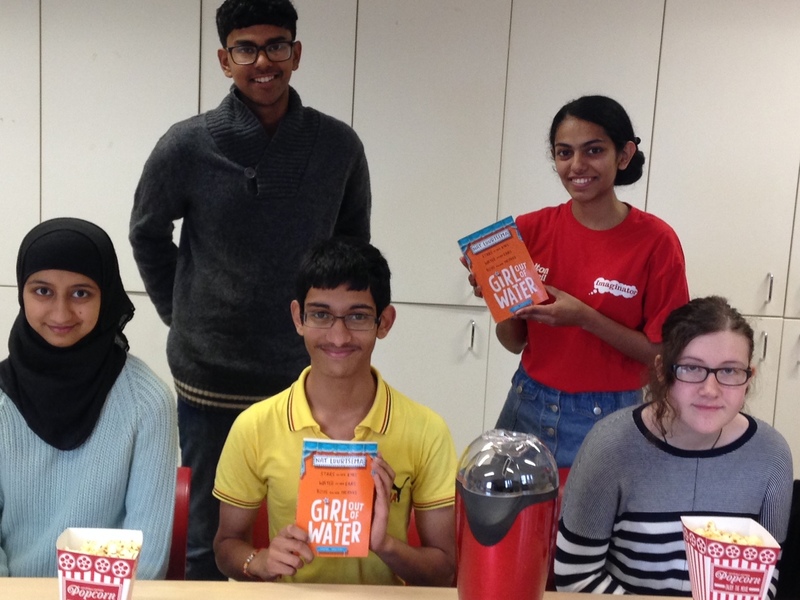 The Imaginators from Bolton were the winners of this month’s Popcorn Session. They interviewed Nat Luurtsema, author of Girl Out of Water.

Is there a particular event in your life that sparked your creativity for writing this book?

Yes – just like my main character Lou, I was a competitive swimmer and wanted to go all the way to the Olympics, but it became clear that I would never be fast enough. I raced against properly amazing swimmers and was left floundering in their wake, crying. That’s where our stories part company! I spent years feeling sad and failed, and as a result developed unhealthy relationships with food and winning things. I didn’t think anyone wanted to read about THAT, so I decided that Lou would respond in much more fun ways.

We’re aware that the book is a work of fiction, but do you see yourself in any parts of Lou?

I’m about 5’9” and I grew to this height at a very young age, so I know exactly what it’s like to be gangly and have your head floating above your peers like a talking balloon. Also, when I was younger I would always think of funny things that I was too shy and self-doubting to say. I show this more in the next book, as I remember shushing the funny part of myself so much and I wish I hadn’t!

We’re different in lots of other ways, though – she’s much more laid back than I am, and she argues with her family less. I was so much more annoying at her age but I wanted Lou to have a nice home life. And I loved schoolwork, whereas Lou’s much more easily distracted!

What was your inspiration for writing this book?

I wanted to write a funny book that someone could look forward to reading after a hard day at school. I found my teenage years really hard: my hormones, my skin, my awkwardness and my confusion about EVERYTHING. But books felt like my safe place, especially funny books. So I wanted to write a book like that, one that was just pure escapism. 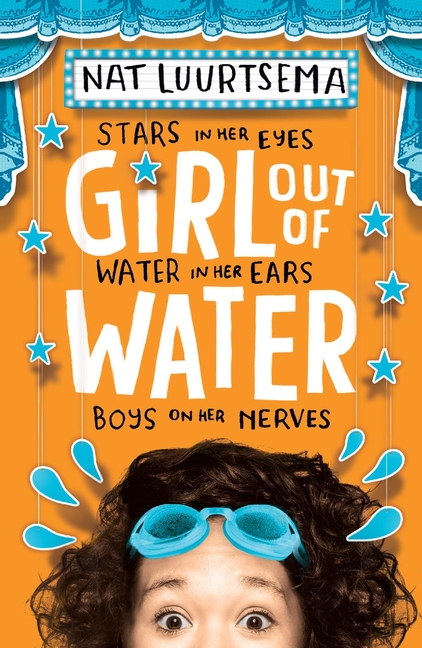 You have written screenplays and comedy sketches before. What inspired to you to make the switch to writing novels?

I like to write everything! Right now I’m writing two feature films, two short films and another novel, the sequel to Girl Out of Water. And it’s lovely, because when one film annoys me and I can’t work out how to finish it, I put it aside and go to my novel. My novel understands me! (This is my argument for why I should have four or five boyfriends for when one of them annoys me, but my boyfriend has put his foot down.)

I enjoy writing films, but you need to build or find everything you wrote in the script to put it on camera. In a book, for example, you can break into an aquarium and swim with an eel and no one makes you find a stunt eel and fill out a health and safety form about tuna bites.

In the book, the main character Lou is a very keen swimmer. Why did you choose that particular sport to focus on?

I miss not being a good swimmer any more, and the closest I can get to a time when I was a fast, strong swimmer is to describe it in a book and relive it through Lou. (OK, well, I could also restart swimming training and spend months getting fit and strong again, but you know what…? I’m eating a croissant right now so I can’t.)

Do you have plans for another young adult novel. And if so, are there any secrets you can share?

Yes! I am writing the sequel to Girl Out of Water right now, and Lou is experiencing how complicated life can be when you have more than one friend. And also discovering that she’s a funny person. I have an idea for another book, maybe YA or adult, about ghost spies. (It sounds rubbish, I know, but I think it’ll be good!)

During your own high school years, would you say you were more like Lou or Lav?

I wish I was like Lav! She’s so kind and confident. But really I was more like Lou – gawky and awkward, and so funny in my head but not so much out loud.

Do you play sports in real life?

I go to the gym sometimes, but running on the spot feels quite depressing! I went kayaking last weekend, and within five minutes I was trying to Google “How much to buy a kayak?” while my instructor yelled at me about how dangerous that was. I think kayaking is my new “thing” – it’s so much fun! Although sometimes you have to fight off stroppy swans or geese, so it’s occasionally terrifying.

Lou’s coach, Debs, disowns Lou when she doesn’t make it to the training camp. Why did you choose to make Debs so harsh, and have you ever known anybody similar to her in real life?

Yes – I had a few teachers when I was a kid who were so mean! Even in hindsight I look back and think, “What was going on with you that you were so mean?” So I channeled my rage into Debs. (For the record, I also had lovely teachers who were so patient with divvy over-emotional me, but Debs grew out of my memories from the bad ones.)

Thanks Nat! Keep an eye out for the Imaginators’ book trailer for Girl Out of Water, coming soon!