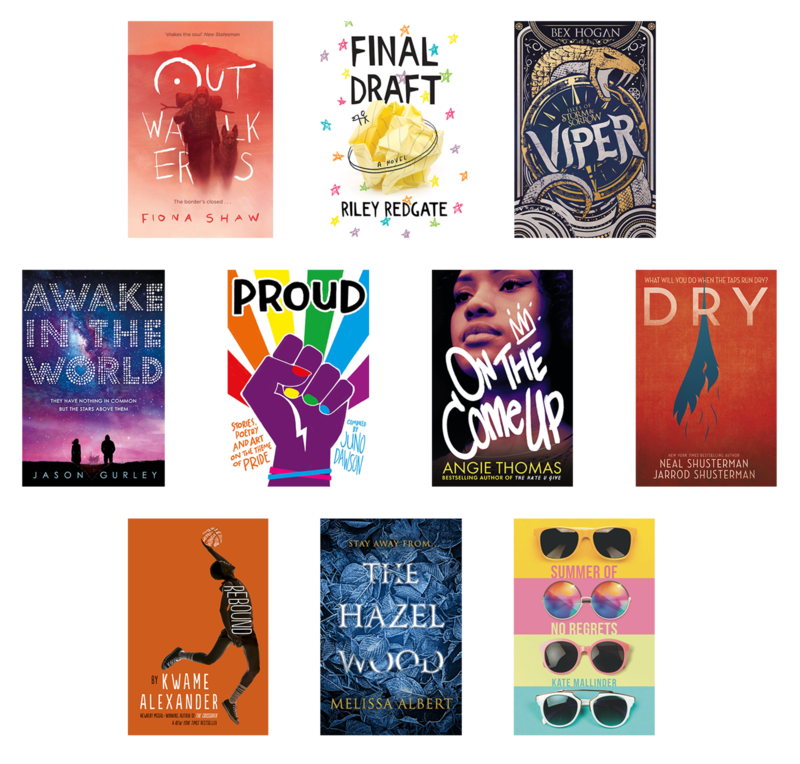 Read on to find out more about the books and keep an eye out for the collection in your local library!

On the Come Up by Angie Thomas

Sixteen-year-old Bri wants to be one of the greatest rappers of all time. Or at least win her first battle. As the daughter of an underground hip hop legend who died right before he hit big, Bri’s got massive shoes to fill. But it’s hard to get your come up when you’re labeled a hoodlum at school, and your fridge at home is empty after your mom loses her job. So Bri pours her anger and frustration into her first song, which goes viral…for all the wrong reasons.

Bri soon finds herself at the center of a controversy, portrayed by the media as more menace than MC. But with an eviction notice staring her family down, Bri doesn’t just want to make it—she has to. Even if it means becoming the very thing the public has made her out to be.

The border’s closed, Jake said. No one can get into Scotland, just like no one can cross the Channel…

This is England and it’s no longer a free country. The Government can track anyone, anywhere, from a chip implanted at birth. But Jake has escaped from his Academy orphanage, and he needs to get to Scotland with his dog, Jet.

When the Outwalkers gang grabs him, they go off-grid while the Government hunts for them. The closer they get to Scotland, the more dangerous it is. Because now, it’s not only their own lives that are at stake…

A stirring, bold and moving anthology of stories and poetry by top LGBTQ+ YA authors and new talent, giving their unique responses to the broad theme of pride. Each story has an illustration by an artist identifying as part of the LGBTQ+ community.

Viper: Isles of Storm and Sorrow by Bex Hogan

Seventeen-year-old Marianne is fated to one day become the Viper, defender of the Twelve Isles.

But the reigning Viper stands in her way. Corrupt and merciless, he prowls the seas in his warship, killing with impunity, leaving only pain and suffering in his wake.

He’s the most dangerous man on the ocean . . . and he is Marianne’s father.

She was born to protect the islands. But can she fight for them if it means losing her family, her home, the boy she loves – and perhaps even her life?

Summer of No Regrets by Kate Mallinder

After Hetal’s gran shares her life-long regret about not seeing her now terminally ill best friend for 50 years, friends Cam, Hetal, Nell and Sasha decide to have a summer of #NoRegrets. But living their summer regret-free isn’t as simple as it first seems and as their lives unravel it’s their friendship that gives them the strength to face up to the future.

The Hazel Wood by Melissa Albert

Seventeen-year-old Alice and her mother have spent most of Alice’s life on the road, always a step ahead of the strange bad luck biting at their heels. But when Alice’s grandmother, the reclusive author of a book of pitch-dark fairy tales, dies alone on her estate – the Hazel Wood – Alice learns how bad her luck can really get.

Her mother is stolen, by a figure who claims to come from the cruel supernatural world from her grandmother’s stories. Alice’s only lead is the message her mother left behind: STAY AWAY FROM THE HAZEL WOOD.

To retrieve her mother, Alice must venture first to the Hazel Wood, then into the world where her grandmother’s tales began…

When the California drought escalates to catastrophic proportions, a group of teens is forced to make life and death decisions in this harrowing story of survival.

The drought – or the Tap-Out, as everyone calls it – has been going on for a while now. Everyone’s lives have become an endless list of don’ts: don’t water the lawn, don’t take long showers, don’t panic. Until the taps run dry.

Suddenly, Alyssa’s quiet suburban street spirals into a warzone of desperation; neighbours and families turned against each other on the hunt for water. And when her parents don’t return, she and her younger brother must team up with an unlikely group in search of water. Each of them will need to make impossible choices to survive.

Awake in the World by Jason Gurley

Vanessa has been reaching for the stars since she was a little girl, and is determined to get into her dream Ivy League university to study astronomy.

Zach is a talented artist, but he’s not even thinking about college. He needs to stay home and support his family, working on the same oil rig where his dad was killed in an accident.

Their future looks poles apart… but then again, opposites attract.

It’s 1991. Charlie Bell is still mourning his father, and struggling to figure out how he feels for his best (girl) friend, CJ. When he gets into trouble one too many times, he’s packed off like the Fresh Prince to stay with his grandparents for the summer.

There his cousin Roxie introduces him to a whole new world: basketball. A legend on the courts is born.

But can Charlie resist when trouble comes knocking once again?

Laila Piedra doesn’t drink, doesn’t smoke, and definitely doesn’t sneak into the 21-and-over clubs on the Lower East Side. The only sort of risk Laila enjoys is the peril she writes for the characters in her stories. But just before her graduation, Laila’s creative writing teacher and number one fan is replaced by Nadiya Nazarenko, a Pulitzer Prize–winning novelist who sees nothing at all special about Laila’s writing.

A growing obsession with gaining Nazarenko’s approval leads to a series of unexpected adventures. With her sanity and happiness on the line, Laila must figure out if enduring the unendurable really is the only way to greatness.

Visit our Blog for the latest Reading Hack news